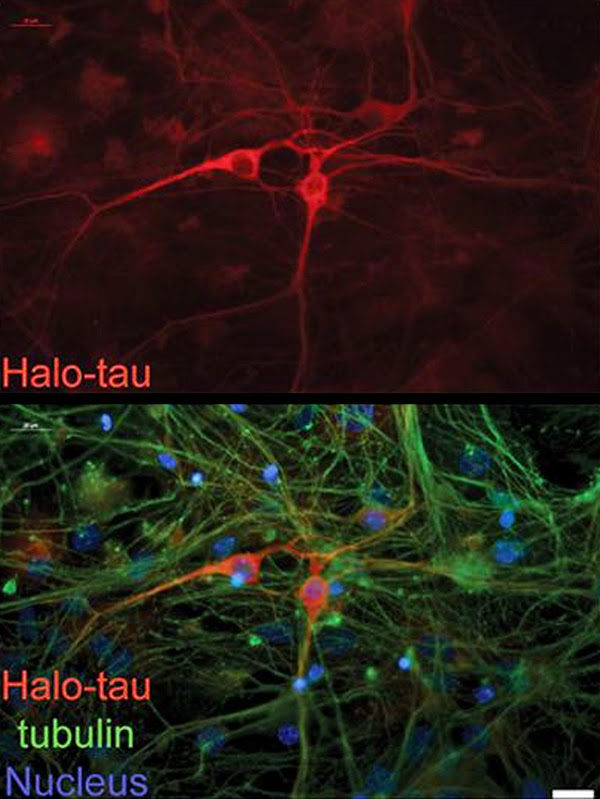 You might think that the “kiss-and-hop” is a dance move strictly forbidden at a Duggar homeschool prom, but it refers to the quick dynamics of the microtubule-associated protein tau. Today’s image is from a paper describing unexpected results about how tau resides on and regulate microtubules without physically impeding microtubule motors.

The microtubule-associate protein tau binds to and stabilizes the microtubules within an axon. As most tau is believed to decorate axonal microtubules, it was previously unclear how tau can function in its non-microtubule-dependent roles, or how the presence of tau does not interfere with microtubule motors and axonal transport. A recent paper by Janning and colleagues describes the use of single-molecule tracking of tau in living cells. Janning and colleagues found that tau resides on a single microtubule for 40ms before hopping to the next microtubule, and that this unexpectedly short residence time is sufficient to affect microtubule stability. This “kiss-and-hop” mechanism allows for normal axonal transport, and suggests how some tau functions away from microtubules. In the images above, tau (red) is labeled in mouse cortical neurons, as are microtubules (green) and the nucleus (blue).

Promote Your Page Too